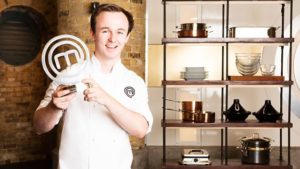 Craig commented: “To be the last man standing is unbelievable. It’s a dream come true. I’ve loved absolutely every minute of it. My parents will be very proud.”

Marcus said: “You don’t come across cooks like this very often. We’ve just found a star of the future. What a fabulous talent.”

Monica added: “Not only is he good in the savoury section, but he’s produced some out of this world desserts as well.”

Gregg commented: “The best chefs in the world learn, and create their own style. And that is what I’ve watched Craig do in this competition – dish after dish after dish.”

This week in The Finals, Craig faced competition from finalists, Louisa Ellis (aged 22) and Steven Lickley (aged 25 at time of filming).

Competing to show the judges how far he could push himself, Craig’s creativity, determination and cooking skills were tested to their limits in extraordinary culinary tasks throughout the week.

His challenges included creating and delivering a Michelin-standard dish for 23 gastronomical giants from around the world with the other contestants, and travelling to the South of France to learn in the two-Michelin starred kitchens of the fourth best restaurant in the world – Mirazur – from Argentinian chef Mauro Colegreco.

The ultimate challenge of the competition for the Final Three chefs (Craig, Louisa and Steven), was to create ‘the best three-course meal of their lives’ in three hours. Craig’s winning menu started with torched mackerel and mackerel tartare, with salt-baked beetroot, horseradish milk gel, beetroot pickled onions, garnished with beet leaves and a sorrell and dill iced granita.

During the tasting of his winning menu, Monica said: “This speaks volumes about where you started and where you are now as a chef. You’ve always given us delicious, beautiful food but it’s on another level now. Where are you going to be five or ten years from now?”

Craig said: “I first became interested in cooking at an early age but I didn’t really click in my head as something I’d want to do as a career until I cooked at school and realised I was good at it. Encouragement from my food tech teacher led me into this career. I’ve been cooking for about six years now. Two weeks after my 16th birthday I was in the kitchen full time.”

After school, Craig trained at two-AA Rosette restaurant Boulters in Maidenhead under chef Daniel Woodhouse. Whilst working there, he achieved NVQ Levels 2 and 3 in Professional Cookery from Henley College. His current job as sous chef at the Michelin-starred gastropub The Royal Oak in Maidenhead means he is the youngest in the kitchen, but also one of the most senior.

Considering his future plans, Craig said: “As the next step in my career, I’d love to focus more on fine dining and push myself to learn more whilst I can. My ambitions longer term are to learn as much as I can still while I’m young and hopefully, when the time is right in years to come, step up to my own head chef role.

Applications for ‘MasterChef: The Professionals 2018’ are now open.