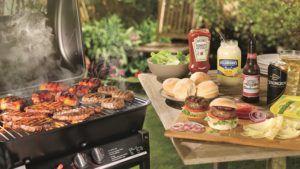 With temperatures nudging the early 30s and England’s World Cup campaign continuing this weekend, Tesco says most of its customers have one thing on their minds: stocking up for BBQ parties.

For the last week, sales of BBQ food, salad vegetables, ice cream, beer and wine have been the most popular items at the supermarket chain.

Based on last week’s demand, the retailer predicts that this week it will sell:

“The mere mention of a heatwave from weather forecasters is enough to change shopping plans, and judging by present sales, many people are enjoying al fresco dining right now.

“But of course with the added excitement of the World Cup and England doing well, many people are inviting friends and family over to enjoy the fun together.”

She added: “This is already the best summer for BBQ meat sales for several years, and our most popular lines so far have been maple pork loin steaks and Lemon & Herb Jerk Chicken Wings.”

For fans of hot food the temperature is set to rise even further this week as Tesco will be re-launching the hottest chilli pepper in the world: the Carolina Reaper, which is 400 times hotter than a jalapeno.