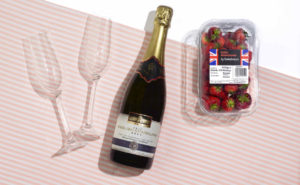 Sainsbury’s expects strawberry sales to increase by 700% during the British season (April to October) with sales peaking during the Wimbledon Championships.

The tennis tournament at the All England Lawn Tennis and Croquet Club in Wimbledon began on Monday (July 3) and runs until July 16.

The supermarket chain claimed: “During summer, this traditional courtside snack is our best-selling product – outselling all other products, even milk and bread.”

Sainsbury’s strawberry technician Peter Czarnobaj confirmed this. “We sell more strawberries than any other product for up to 16 weeks,” he said. The retailer offers 18 different varieties of British strawberries throughout the season.

Alongside a surge in strawberries, sales of sparkling wine increase by 24% at Sainsbury’s during the second week of Wimbledon at local stores.

For tennis fans stocking up on their way to Henman Hill, convenience wins; 20cl single-serve bottles jump an impressive 1,600% in stores local to the Wimbledon tournament.

Henman Hill is an area in the grounds of the All England Lawn Tennis and Croquet Club where crowds of people without showcourt tickets watch the tennis matches live on a giant television screen at the side of No. 1 Court.