Wilko smashes £1 million target in a year of charity fundraising

24th May 2017 News Comments Off on Wilko smashes £1 million target in a year of charity fundraising 2,798 Views 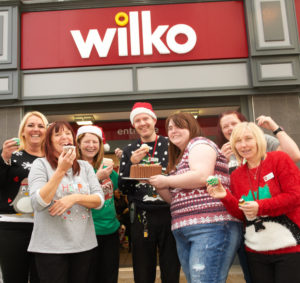 Multiple retailer Wilko raised £1.3 million for local and national charities from May 2016 to April 2017, exceeding its £1 million target.

From sponsored walks, bike rides and bake-offs, to charity football matches and even body waxing, staff throughout the chain hosted a range of events to raise the funds.

The family chair of Wilko’s charity committee Nick Wilkinson said: “As a family-run business, charity and supporting great work within our communities has, and always will be, at the heart of everything we do. The fantastic support of our customers and team members means we are able to consistently support charities close to our hearts.

“We’re extremely proud of our team members for all the hard work they’ve put in over the past 12 months to fundraise in their local areas. Without this and the support of our customers, we wouldn’t have been able to achieve and exceed our £1 million target! [The final total of] £1.3 million is an outstanding sum of money and will undeniably make a real difference to these hugely important charities, changing many people’s lives for the better.”