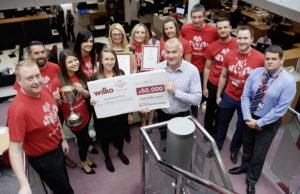 A team from high street chain Wilko has raised £50,000 for The Prince’s Trust youth charity.

A group of staff at the multiple retailer’s head office recently took part in the Million Makers scheme. This is a corporate challenge run by the charity that invites teams of employees from companies across the UK to devise a fundraising business initiative, which is then pitched to a Dragon’s Den style panel of judges from The Prince’s Trust.

Selected teams are then given £1,500 seed funding and challenged to raise at least £10,000 within a six-month period.

Wilko’s 13-strong team devised an annual fundraising programme across 12 months, in addition to designing and developing a branded Wilko re-usable bag to sell in all stores, with all net proceeds going to the charity.

The team smashed the target of £10,000 by raising a total of £50,000. It was crowned winner of the Yorkshire and Humber challenge and invited to The Prince’s Trust Celebrate Success awards in London, attended by HRH The Prince of Wales. There, it achieved third place out of 17 teams with the monies raised, and was awarded the overall ‘National Teamwork’ title.

“Since the re-usable levy bag was introduced in England, we’ve been charging 5p per bag and the proceeds have been donated to charity. The Prince’s Trust is one of the benefiting charities.

“So far we’ve donated an incredible £221,000 to the Trust since the levy was introduced in 2015. The Million Makers scheme was additional support to this.”

Team member Jonathan Ball said: “We held a series of brainstorming sessions and created a shortlist of products. We then stress-tested them to see which had the most appeal, the longest shelf life and which was something we could start selling as soon as possible. The result? The bag was born!

“By the end of the challenge we managed to raise an amazing £50,000 which was generated from the bag sales, as well as a variety of fundraising events.”