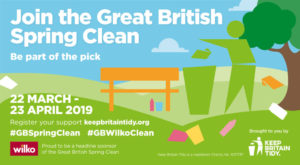 Hardware and housewares chain Wilko has signed up to be the headline sponsor of The Great British Spring Clean 2019.

Organised by the Keep Britain Tidy charity, this year’s Great British Spring Clean – which kicked off on March 22 and runs to April 23 – is being billed as the UK’s biggest ever mass-action environmental campaign.

The initiative aims to inspire 500,000 people to join forces – in partnership with community organisations, businesses and the government – to collect and safely dispose of single-use plastic from our streets, parks and beaches, recycling as much as possible. Last year an army of 370,000 volunteers helped clean up the country, collecting 630,000 bags of litter.

Wilko said: ‘We’re incredibly proud to be headline sponsor. Taking part in the Great British Spring Clean couldn’t be simpler. Whether you want to organise a clean-up of your own, take part in a clean-up or simply pledge your support, we’re hoping you’ll join the cause to help clean up your local environment.’

In addition, Wilko said has put together ‘some handy products to help you get stuck in’. The bundle includes a hi-vis vest, litter picker, refuse sacks, heavy duty rubber gloves and hand sanitiser.

Wilko has also signed a partnership deal with Keep Britain Tidy which sees proceeds from the sale of Wilko carrier bags go towards supporting work to tackle environmental and social issues. Backed by Wilko and its customers, Keep Britain Tidy will be delivering three transformational projects in Blackpool, Leicester and Exeter, helping to create clean and green community spaces.

Keep Britain Tidy chief executive Allison Ogden-Newton said: “We’re delighted that Wilko has chosen to support our charity and help us make a difference. The projects we will be delivering, with their support, will allow us to work with local people and transform the environment for the benefit of everyone living in those communities.”