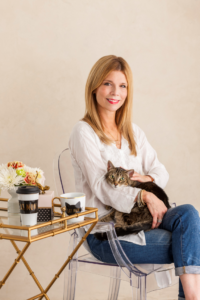 Widdop & Co. has revealed that Rosanna Bowles, the president and art director of Rosanna Inc., will be the guest of honour on its stand at Autumn Fair.

The Oldham-based giftware supplier is the exclusive distributor of the US tableware and home décor brand in the UK and Ireland.

Rosanna started the business in 1982 out of her home in Seattle, Washington. Over the past three decades she has won many design awards and has been featured in the ‘The New York Times’, ‘O, The Oprah Magazine,’ ‘Harper’s Bazaar’, and many other publications.

She will be on the Widdop stand (N6-N20) in Hall 4 on the Sunday (September 3) and Monday (September 4) of the show, answering questions about her collection and signing copies of her first book, “Coming Home: A Seasonal Guide to Creating Family Traditions,” which features more than 50 recipes.

All visitors to the Widdop stand on the Sunday and Monday of the show will be entered into a prize draw (to be drawn by Rosanna at 4pm on Monday on the stand) to win a pack of Rosanna products worth £500 at retail.

Autumn Fair will be held from Sunday September 3 to Wednesday September 6 at the NEC in Birmingham. It is the sister event to Spring Fair, which took place in the same venue in February.