Widdop and Co. signs up to Enid Blyton themed housewares 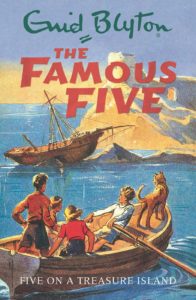 Widdop and Co. has signed an agreement with Bulldog Licensing for the Enid Blyton brand.

Children’s author Enid Blyton’s best-known work is ‘The Famous Five’ series, but her titles also include ‘Malory Towers’ and ‘The Secret Seven’.

Her books have sold hundreds of millions of copies, and regularly feature in the list of the top10 best-selling authors in the UK.

Enid Blyton also has huge international appeal and is the fourth most translated author in history after Agatha Christie, Jules Verne and William Shakespeare.

The deal with Widdop and Co. will see the giftware wholesaler produce a range of housewares, including ceramics, glassware, kitchen accessories and baking items, along with camping kits. cushions and gardening products.

The Oldham-based supplier joins a growing programme of licensees. Recent signings include Gibsons for puzzles, The Lagoon Group for toys and games, and Smiffys to produce fancy dress for World Book Day 2018 featuring characters from ‘The Famous Five’, ‘Malory Towers’ and ‘The Twins at St Clare’s’.

Bulldog Licensing is launching ‘The Famous Five’ programme this year to coincide with the 75th anniversary of the first book, with greetings cards, stationery, and gift products on the way.

Bulldog Licensing Director Vicky Hill said: “We’re dealing with a huge amount of interest in the Enid Blyton brand, as evidenced by us signing four licensing agreements in just the last few weeks.

“Licensees are anxious to tap into the huge nostalgic appeal of Enid Blyton’s work and we expect to be announcing even more deals soon.”

A recent series of tongue-in-cheek ‘Famous Five’ books for grown-ups by Quercus has been a publishing sensation. The novels follow the success of last year’s spoof Ladybird series.

The books have been penned by journalist Bruno Vincent but Eileen Soper’s original illustrations have been used throughout – though they have been given updated captions.

They see the Five face some 21st-century dilemmas such as what to do about Brexit, becoming parents, giving up booze, going on a strategy away day and dealing with hangovers.

And in ‘Five Go Gluten Free’, Anne encourages the group, including Timmy the dog, to adopt an entirely gluten-free diet – and insists on bringing her spiralizer along to picnics.

Share
Previous BRC: cards overtake cash as number one payment method
Next Which domestic appliances are most likely to catch fire?