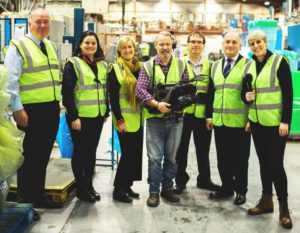 What More UK had a starring role on TV this morning (Monday, January 8) when the housewares manufacturer took part in BBC One’s ‘Breakfast’ on BBC One.

The national morning news programme broadcast a series of interviews between business presenter Steph McGovern and What More UK director Tony Grimshaw OBE, live from the plasticware and bakeware supplier’s factory at Burnley in Lancashire

According to the show, ‘British manufacturers are enjoying a boom, with order books busier than they have been in decades, thanks mainly to the weak pound, which is making things we produce in the UK cheaper abroad’.

Steph told viewers that the reason why the BBC had paid a visit to What More UK was because “it’s a manufacturer that’s seeing growth, particularly in exports. Like many companies, they have been trying to work out what it will mean for their business when we leave the European Union. So they’ve been looking at trying to get more business in other countries outside the EU – and they’re managing to do that pretty successfully.”

In the first interview, Steph gave viewers a quick tour of part of the factory, which employs some 230 people in total and exports about 17% of its production.

She said: “What More UK make about five million different products here every month and they’ve invested quite a lot of money in these machines over the last few years, to try and up their game to be competitive with the rest of the world.”

In Tony’s words: “Business is going quite well. We’ve just made a major investment of £8 million on new injection moulding machines – and these machines need filling with orders because they give us more capacity. So, although we’ve got plenty to do, we’re waiting for more to do.”

Steph asked about the background to the company’s exporting activity and Tony replied: “In 2008, we made another major investment in the business. The boss said: ‘I’m going to spend a lot of money – what are you going to do with the spare capacity?’ At that time we dealt with [the UK and] the Republic of Ireland only. But he not only posed the question, he gave us the answer. He told us we would export – and that’s what we’ve been doing since 2008.”

What More UK now exports its goods to more than 70 countries and holds of the Queen’s Award for Enterprise in recognition of outstanding achievements in international trade.

Steph asked: ‘How difficult or easy has it been?’ Tony said: “If I say it’s been easy, everyone else will do it and make it difficult in the future. But we’ve made major investments which have made it easier. The boss has invested in new machinery, new product development and even more importantly, he’s invested in our people. So, because of that, it’s not been difficult.”

Tony said he felt “very confident” about the future and revealed: “We’re going to spend another £3 million this year on more new machinery so it just takes us to another level. And our boss would not spend a penny – he’s not tight by the way, but he would not spend a money- if he didn’t see something as an end game.”

Steph conducted a total of four different interviews during the morning. Here is the link to the stream – https://www.bbc.co.uk/iplayer/episode/b09k7d80/breakfast-08012018#

Talking to www.HousewaresLive.net this afternoon, Tony explained how What More UK got involved in the show. “The phone went on Thursday evening and we were asked: ‘As one of the export leaders in the plastic products industry, would you be willing to host BBC Breakfast on Monday morning?’ After a micro second of thought, I shouted ‘yes!’ in an overloud voice.

“Fast forward to 4.30am this morning and I was on site greeting the BBC technical team. After a raft of questions from Steph as background, she hit the airwaves for the first ‘preview’ broadcast at 5.50am. Then she did broadcasts at 20 past the hour and 10 to the hour until 9am.

“Put a price on that piece of publicity: seven different slots in three hours. Priceless! Steph did a great job explaining [our production] process to viewers and her questions related mainly to the export side of our business.

“Then, to top it off the BBC thanked What More UK for the opportunity. That was even more priceless!”