What More UK bakes up a treat for Macmillan Cancer Support

4th October 2017 News Comments Off on What More UK bakes up a treat for Macmillan Cancer Support 1,416 Views 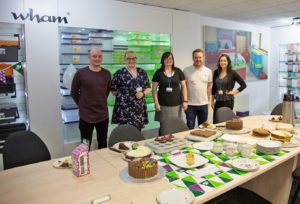 Last Friday (September 29) the main showroom of What More UK was transformed into a baking hotspot to raise funds for Macmillan Cancer Support.

The Lancashire housewares supplier took part in The World’s Biggest Coffee Morning, which is the charity’s biggest fundraising event for people facing cancer. It asks people all over the UK to host their own coffee mornings and donations on the day are made to Macmillan.

Members of the What More team baked an assortment of goods from delicately crimped meat pies from receptionist Debs Feeney to a showstopper chocolate orange cake from sales director Andy Riley.

A wide selection of bakeware was used to prepare each bake, from Wham Cook non-stick cake pans to the patented PushPan in both non-stick and aluminium. The new range of Wham Cook cake storage also came in handy for transporting the various bakes to the office.

The office staff donated generously and a total of £212 was raised.