What are the nation’s most cooked dishes? 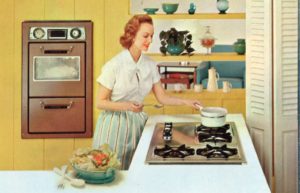 Some British mums are cooking more than four times a day, according to new research.

A quarter of 2,000 mothers polled in a study commissioned by frozen food retailer Iceland admit that to meet different family schedules, they are forced to play chef several times in a 24-hour period.

One in 16 even cook for multi-generational and larger families, who can require up to 10 differing meal times every day.

A third of mums admit they are cooking more often to try and meet the tastes of their fussy children, while a further 21% have family members who come home at separate times to eat alone.

But the survey shows that cooking so many different meals is leading to a mountain of food waste, with 26% of Brits admitting they ‘regularly’ throw out edible grub.

The average family wastes £10 a week on ingredients that already have in their cupboards or fridge, while 19% waste £20 or more. A further 15% of mums admit they ‘regularly forget’ what’s in their store cupboard.

And despite food planning being one of the best ways to slash waste, 57% of families admit they don’t plan meals – although 18% want help so they can start.

Thinking up new ideas for meals is the biggest kitchen challenge for UK families, with two-thirds saying they struggle. A further 64% worry about the cost of food, with 28% claiming they don’t have enough time to cook.

And this is having knock-on effect on the nation’s health, with only 17% of families polled saying they cook healthily. A quarter admitted they need to improve their cooking ‘a lot’ to make healthy meals.

Nick Canning, joint managing director of Iceland (who commissioned the research for Channel 4 cookery show ‘Eat The Week With Iceland’) said: “Family life can be frantic, but with some savvy planning it’s possible to eat well, eat healthily and eat affordably.

“Just 15 minutes a week checking what’s in the kitchen and planning your meals can cut £520 a year off the family food bill by using up what you already have.

“Eating well is an investment in your child’s future, so we’re doing all we can to support the UK’s families to achieve this.”

The survey also highlighted that while nine out of 10 mums quizzed want to be more adventurous in their cooking, one in seven admits to eating exactly the same meals on the same days each week.

Pasta is the nation’s most cooked dish, with 70% of mums making it every single week, while 52% regularly serve up a roast dinner.

A total of 47% of mums admit to giving the family sandwiches for a meal when time is tight, and a fifth resort to fish fingers.

Options such as chicken nuggets and fish and chips appear frequently on the nation’s plates too. Curry, sausage and mash, shepherd’s pie and fajitas also feature highly on the list of most cooked meals.

THE NATIONS MOST COOKED DISHES

Share
Previous 41 is the age Brits get into gardening, says poll
Next What’s on our smart home wish list?