We’re a nation of campers 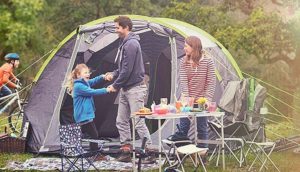 According to research by retailer Halfords, almost half of us are setting off on a camping holiday in the UK this summer, with 43% of Brits looking forward to sleeping under canvas.

A survey of 2,000 people revealed that for 54%, exploring the great outdoors is their main motivation, while 50% said they’ll be camping because it’s a more affordable option than holidaying abroad.

A total of 41% describe camping as ‘the perfect way to spend time with family’, while 23% look forward to switching off from the stresses of modern life.

But it seems we’re a competitive bunch, even when in leisure mode. Of those polled, 25% like to arrive early at the campsite to snag the best spot and 16% like to be the first to pitch their tent, racing friends or loved ones to claim bragging rights. And one in 10 run to the shower blocks first every morning, before the hot water runs out.

Some 9% want to have the biggest tent at the campsite so they can show off to their neighbours, and 8% admit to scoping out what gear fellow campers have in advance, so they can one-up them.

When it comes to kitting out their pitch, 9% can’t wait to set up a fire pit, 8% bring their own portable toilet and 7% decorate with flags or fairy lights.

Despite this spirited approach, we’re a friendly lot at heart, with 16% keen to meet camping neighbours as soon as they arrive, and 12% cracking open the bubbly as soon as they set up. A savvy 6% even say they get to know the on-site staff for extra perks.

But the study’s findings uncovered that despite being a nation of campers, we’re not always happy. Pet peeves include having to go outside to use the toilet – 42% cite this as the most annoying part of their camping trip – and 34% said disruptive neighbours tend to get on their nerves.

Despite wanting to get away from the daily grind, 20% admit to missing domestic creature comforts while they’re on the campsite, 18% struggle to sleep under the canvas, and 19% complain that they’re either too hot or too cold and can’t get comfortable.

Kids – our own or others – can be a bit of a pain too for 19%, who say that children running amok are the most annoying thing while camping.

Halfords motoring and leisure accessories expert David Howells said: “Our sales across camping and outdoor leisure were up 45% on April to May last year, and it’s no surprise that Brits are choosing to holiday in the UK rather than travelling abroad, which can be expensive and stressful. It’s really easy to forget that we live in one of the world’s top tourist destinations – and summer is a great time to get out and explore.”