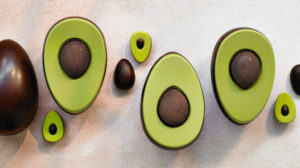 The retailer’s customer director Martin George said: “As shoppers enjoyed spring-like weather, sales of soft fruits, salads and prepared veg were up, as were sales of deli food. With Pancake Day arriving later than usual this year (Tuesday March 5), customers also stocked up on maple syrup.”

He added: “Easter sales are performing strongly, including the return of the Waitrose Chocolate Avocado Easter egg which was a top seller last week.”

In 2018, a Waitrose’s chocolate Easter egg shaped like an avocado became the supermarket’s fastest selling Easter egg ever. This year, the popular egg has returned but with the addition of Baby Chocolate Avocados: mini versions of the avocado look-alike. The baby avos are available in packs of three, priced at £4 or a single mini avocado priced at £2. Waitrose has also introduced lime flavoured vegan jelly avocados as a novel alternative to the chocolate version, available in a pack of six for £2.50.

Waitrose Easter egg product developer Kate Kind commented: “We know our customers love avocados, but we never realised quite how much until we launched our Chocolate Avocado last Easter! The avocados were a huge hit with avo-lovers hunting for them in Waitrose & Partner shops across the UK. They sold out much quicker than expected and were such a talking point among family and friends that we wanted to recreate them with some fun, mini versions this year, to make sure our shoppers had a whole array of avocado treats to choose from.”

The original Chocolate Avocado is priced at £8. It features a Belgian chocolate shell and stone (made with 70% cocoa), and a white chocolate middle, which uses natural colouring to imitate the green flesh of the fruit. Despite looking just like a giant avocado, the eggs are made using 100% chocolate, with no avocado flavouring.

Last week Waitrose also announced it was introducing a home compostable bag for its Waitrose Duchy Organic bananas: the first of the retailer’s fresh produce to be sold in a home compostable bag. The move to the bag, made with non-GM corn, will save an estimated 18 tonnes of plastic per year. The bag can be home-composted, or reused first as a food caddy liner at home, before being home-composted.