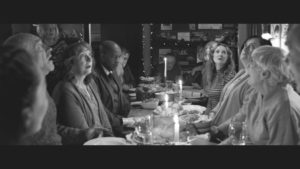 Waitrose aims to put community spirit at the heart of its Christmas campaign with an atmospheric TV advert which made its debut last Sunday (November 12).

The supermarket chain’s first black and white advert is inspired by real life events at a remote pub in the Yorkshire Dales, where local villagers gather for a drink on Christmas morning.

The retailer said: ‘When a snowstorm hits the area, we witness how a generous act of Christmas spirit brings the community together in the most unexpected of Christmas Day meals.’

Waitrose customer director Martin George said: “Food plays an essential role in bringing people together. When we have the opportunity to eat with others, we can enjoy great food and feel closer to those we share the experience with. As our ad depicts, eating together is a way to share not just food but friendship and community spirit.”

The advert, which was created by agency adam&eveDDB, is set at The Tan Hill Inn near Richmond in Yorkshire, which is the highest pub in Britain at 1,732 ft. As portrayed in the ad, the 17th century pub is regularly cut off by snow and people have been snowed in 50 times since 2005.

Using the line ‘At Christmas, there’s nothing quite like Waitrose’, the 90-second TV ad aired last Sunday during ‘The X Factor’ on ITV1 and on waitrose.com/christmastogether

Acclaimed author Anne Fine has written a children’s book inspired by the Christmas advert. ‘Let It Snow’ is a tale about two animal families who become unlikely companions over a festive meal.

Anne is the second Children’s Laureate and has written over 50 children’s books including ‘Madame Doubtfire’, the story that inspired the successful film ‘Mrs Doubtfire’.

‘Let It Snow’, published by David Fickling Books, went on sale in Waitrose branches and on www.waitrose.com for £5 on Monday (November 13). For every book sold in Waitrose, a donation of 50p will be made to The Trussell Trust: a charity which runs a network of over 400 food banks, giving emergency food and support to people in crisis.

Continuing the theme, Waitrose will create ‘community tables’ in many of its in-store cafes inviting customers to join others at shared tables.

Waitrose will also be running a nationwide competition online offering customers the chance to win one of five foodie feasts for their community group, catered by some well-known names. Customers can enter at www.waitrose.com/christmascompetition.

The brand advert will include cinema, outdoor and digital advertising as well as content in Waitrose publications and on social media.

The wider Christmas campaign will also include product advertising showcasing some of the Waitrose’s festive food offer, including Heston from Waitrose Persian Spiced Christmas Pudding, Italian Style Turkey Parcel, Brunch Croissants & Bloody Mary Shots and Leckford Estate Brut, which is produced at the supermarket’s own farm in Hampshire.