11th May 2017 News Comments Off on Waitrose shoppers opt for warming food 1,760 Views 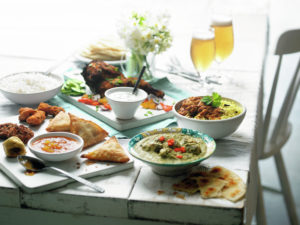 Total sales excluding fuel for Waitrose for the week ending last Saturday (May 6) were up 0.9% compared with the year-ago period.

The supermarket chain’s director Helen Hyde commented: “With the overcast weather, customers opted for roasts and warming food, with meat accompaniments such as gravy up by 20%.”

“In-store cafes also saw a boost in sales from the cloudy weather, with sales rising by 9% and hot cafe food particularly popular, with sales increasing by 24%.”

The week saw the start of celebrations for the Waitrose Duchy Organic brand, which commemorates its 25th anniversary this year.

Duchy Originals was founded by HRH The Prince of Wales in 1992 to champion organic farming. It is known today as Waitrose Duchy Organic, following a partnership between Duchy Originals and Waitrose in 2009.

The grocer said Waitrose Duchy Organic is now the UK’s largest own-label organic brand and the second largest UK organic brand overall. It added that annual sales for the brand have surpassed £200 million for the first time.