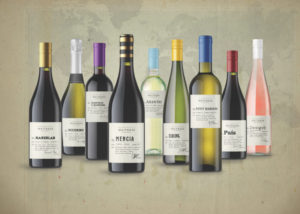 The ‘W’ range, which launches in-store and online from June 17, will introduce an experimental range of wines from different regions and countries including Sardinia, Austria and Chile.

A survey of 2,000 people in the UK conducted by 72Point for the grocery chain revealed that that the most familiar grape varieties in the UK are Chardonnay, Sauvignon Blanc and Cabernet Sauvignon, as they were recognised by at least 85% of respondents.

The poll also showed that France and Italy are the most popular European countries for Brits to enjoy wine from. France and Spain topped the list of winemaking holiday destinations, with 45% of respondents saying they had tried the local wine while visiting these countries. A quarter said they had supped wine while in Germany and Portugal, and 35% had imbibed Italian wine on location.

The new range was widely unrecognised by those surveyed, with an average of 78% of people stating that they had not heard of the nine new wines launching at the supermarket.

Waitrose & Partners wine buying manager James Bone said: “The ‘W’ range has been a whole team effort, with a great deal of care and effort placed on selecting the wines that we think our customers will find really exciting. We want this range to inspire and encourage our shoppers to experiment with their wine choices.

“We’ve worked with talented winemakers across Europe and South America to bring together a range of wonderfully exciting wines at affordable prices, some of which have never been widely available in the UK before. We see this as an ever evolving range which we hope to expand in the future.”