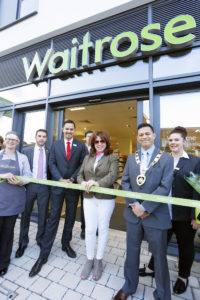 Waitrose officially launched a branch at Addlestone One last Thursday (August 3), becoming the first retailer to open at the new development in the Surrey town centre.

The 6,000sq ft convenience store will provide more than 10,000 food and drink products, as well as a fresh bakery and John Lewis ‘click and collect’ service for online purchases.

The shop was unveiled by The Mayor of Runnymede, Councillor Iftikhar Chaudhri, along with a representative from a local cause chosen to benefit from the Waitrose Community Matters ‘green token’ scheme: Karen Sugarman, who is director of fundraising at children’s hospice charity Shooting Star Chase.

They joined branch manager Jason Latchman and his team in cutting the ribbon and welcoming the store’s first customers.

Rainbow Trust Children’s Charity and The Eikon Charity will join Shooting Star Chase as the first three local causes to benefit from the supermarket chain’s Community Matters scheme. At the end of the month, £500 will be shared between the three groups, according to the number of tokens received from customers.

Customers can continue to nominate different good causes each month, resulting in a total of £6,000 donated each year. In addition, Waitrose’s Addlestone staff will volunteer around 50 hours to local causes throughout the course of the year.

The shop has created 30 new jobs. Jason said: “We’ve got a great team and are very much looking forward to being part of the community and providing local residents with some fantastic food and drink.”

The Addlestone One development will also include a hotel which opens this weekend and a gym which opens in October. A cinema, coffee shop, restaurant and apartments, together with a number of other stores, will open in 2018.

Waitrose has 354 shops in England, Scotland, Wales and the Channel Islands, including 64 convenience branches, and another 27 shops at Welcome Break locations.

L-r: Branch manager Jason Latchman and his team with Karen Sugarman (director of fundraising at Shooting Star Chase) and the Mayor of Runnymede, Councillor Iftikhar Chaudhri