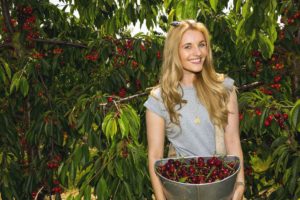 The latest advert from Waitrose aired on TV last week.

The supermarket chain’s summer advertising campaign underlines that Waitrose is the only supermarket to insist that all its British fresh fruit and vegetable growers are LEAF marque certified.

Produce identified with a LEAF Marque logo indicates it has been through an assurance scheme that means it has been produced by farmers whilst caring for the environment.

Accredited growers employ responsible farming techniques, including crop rotation, wildlife habitat creation and limited use of chemical fertilisers and pesticides.
The new advert, which made its debut last Wednesday (July 5), was filmed on Lower Hope Fruit’s Sidnall Farm at Pencombe in Herefordshire, where more than 90 tonnes of cherries are produced for Waitrose each year.

The 40 second advert starts with a close-up of a bee on a cherry blossom branch, and ends with a shot of a cherry pavlova being cut into.

Waitrose head of marketing Rupert Ellwood said: “This is the first time our campaign has featured fresh produce. With Wimbledon, it would have been easy to focus on strawberries. But we know our customers also love British cherries. The nature of how cherries grow, with the blossom and the bees it attracts, creates a very clear link to the environment and what LEAF stands for.”

Elinor Griffin, cherry buyer at Waitrose, added: “The advert captures exactly what goes into growing our sweet cherries, showcasing all of the hard work that the bees do for us.

Fruit manager Emily Livesey from Lower Hope Fruit’s Sidnall Farm said: “Each spring, we introduce around 50,000 bees. It’s an amazing process that many people don’t know much about. The bees are crucial to the cherry-growing process because they cross-pollinate the trees. Without them, we’d have no fruit.”

The first advert in Waitrose’s brand campaign was filmed on a dairy farm near Newbury that supplies milk to Waitrose. This new advert builds upon last year’s ‘live from the farm’ element.

Share
Previous Go out? We’d rather stay in (and cook a big curry), thanks
Next From the light bulb to the tea bag, the top 10 inventions of all time