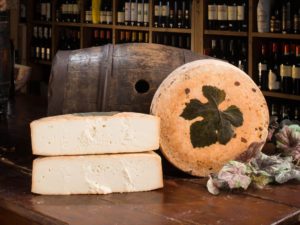 Waitrose claims to be the first UK supermarket to launch a Prosecco cheese.

Arriving in shops on December 4, the grocer describes it as ‘perfect for adding a sparkly twist to a festive cheeseboard’.

The Ubriaco Prosecco DOC, affectionately referred to as ‘drunken cheese’, is a traditional Italian cows’ milk cheese which is bathed in Treviso Prosecco DOC for 40 to 50 days during its ageing process, which takes six to eight months.

The cheese develops a semi-firm edible rind as it soaks in the Prosecco DOC, and the wine imparts floral and aromatic notes to the flavour which is described as ‘reminiscent of flowers, pears and golden apples, with a hint of saltiness in the background’.

Made by a third generation family of cheese-makers in the north Italian town of Veneto, the cheese has a soft, supple texture. The retailer said it goes particularly well with pears and figs, and a glass of Prosecco or aged red wine.