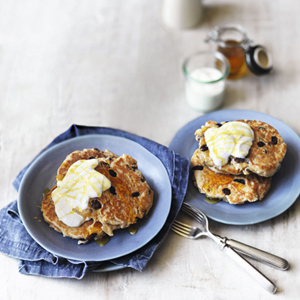 The broadcast was streamed live from the Waitrose King’s Cross Cookery School from 1.30pm.

The session was hosted by food writer and TV presenter John Whaite (the 2012 ‘The Great British Bake Off’ winner) who was joined by Waitrose Cookery School’s head chef Eleni Tzirki and her team of chefs: Russell Goad, Jack Homer and Leyli Homayoonfar.

The interactive masterclass included advice on how to make the perfect pancake, as well as recipes for crêpes Suzette, plus gluten-free and dairy-free pancakes. The finale was a giant stack of pancakes, with fillings, sauces and toppings chosen by the viewers.

Online video manager Courtney Freedman-Thompson said: ‘Pancake Day is a great opportunity for us to engage with our audience through our social content. It’s one of the few days of the year when people focus on one particular food – sharing recipes, watching videos and uploading their own photos.

“We always put our audience at the heart of all of our content, so Pancake Day felt like the perfect topic for our first Facebook Live.”

According to a survey by the supermarket chain’s weekly customer newspaper ‘Waitrose Weekend’, 58% of people in the UK will be making pancakes at home this year.