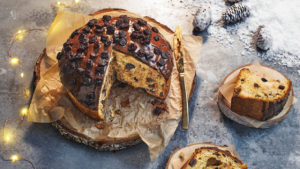 Waitrose has announced additions to its Heston from Waitrose range of Christmas fare.

This year, Michelin-starred chef Heston Blumenthal (who is a Waitrose ambassador) will introduce a luxury Venison Pate with Sour Cherry (£9). Made with three layers, it comprises coarse, smoked venison; smooth venison with chocolate; and a top layer of sour cherry and kirsch.

Also making a comeback for 2017 is the Chocolate Truffle Cake (£12.50). Returning in a smaller size with the addition of hazelnut pieces, the cake includes a nutty Belgian chocolate truffle with Christmas spices, hazelnut liqueur flavoured ganache and a festive gold shimmer.

Heston Blumenthal said: “Christmas is one of my favourite times of the year and I’m thrilled with the products that we are launching in the range.

“From a nod to the ’70s with the Black Forest panettone, to a rich and indulgent venison paté, this new range is perfect for sharing with family and friends this year.”