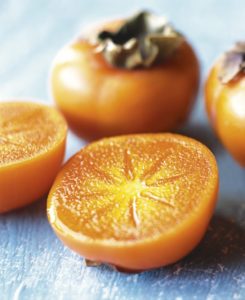 Natalie Mitchell, head of brand development and product innovation at supermarket chain Waitrose, has predicted the top 10 cuisine trends we’ll be seeing in 2018. Her forecasts and comments are below:

‘Persimmons (often referred to as Sharon Fruit) are tipped to be on-trend in 2018. After a recent surge in popularity, Waitrose is looking to stock them in a greater number of shops to meet demand. They add a sweet taste when baked in cookies and cakes, but can also be used in salads and alongside meats too.’

‘The demand for high protein foods continues and, with more of us choosing a flexitarian diet, it’s no wonder there’s such a buzz around new plant-based proteins. Whether with pulses, shoots, grains, seeds, soy or even algae, everyone from tiny start-up companies to big brands is looking for clever new ways to add a plant-based protein punch.’

‘It used to be associated with bland foods from the F-Plan diet [high fibre diet designed to induce healthy weight loss] in the 1980s, but thanks to lentils and other pulses shedding their dull reputation, fibre is well and truly making a comeback. In 2018, fibre will be fashionable again – this time in the form of vibrant, colourful vegetables, fruits and whole grains, as the nation looks to keep their gut health at the top of its game.’

‘Ultra Violet is Pantone’s Colour of the Year for 2018 – and it doesn’t just stop in the world of design. Shoppers will be drawn to all shades of purple when it comes to what’s on their plate. Think figs, aubergines and even purple carrots and sweet potatoes.’

‘Say “Namaste” to tapas-style Indian street food. Forget heavy sauces and chicken tikka masala – this trend is about leaner food which is smoked, grilled or seared. Food trucks selling puris stuffed with zingy vegetables and drizzled in chutney could become a common sight. The cuisine lends itself to hybrids, such as spiced burgers or lamb keema tacos. It’s Indian food like you’ve never seen it.’

‘The light end of the Japanese food spectrum – such as miso and noodle soup – has already had its moment in the spotlight. Now it’s the return of the indulgent end. Gutsy sharing dishes favoured in the country’s izakaya bars [a type of informal Japanese gastropub] are set to become a big thing. Whether it’s yakitori skewered chicken or deep-fried tofu in broth, the trend will combine the hearty ‘dude food’ of the southern US states with the unctuous, rich and surprising flavours of after-hours Tokyo.’

‘Plenty of people know about the boom in posh tonics. But Cognac is now getting in on gin’s act, with mixologists serving the French brandy with tonic.’

‘It’s no longer just about aged malt whisky – blends are on the up. Sales at Waitrose have flipped, with non-age specific malts now making up 60% of sales. Innovative distillers like Glenfiddich are modernising the art of blending and also using flavoured casks, attracting younger customers to the world of malts.’

‘Research (completed using Hitwise/Connexity’s AudienceView) shows that millennials are 57% more likely to search for aperitif ideas online than other age groups, and recent web searches for bitters have risen by 24%. Sales of Campari, Aperol, vermouth and other bitter drinks soared throughout 2017. And this trend is here to stay as Vermut (a red sherry Vermouth made in Spain) is tipped to be the pre-dinner drink of 2018.

‘This previously forgotten grape variety is back and predicted to be popular with wine lovers. Described as a halfway house between Picpoul and Muscadet, this wine was sought out by our Waitrose wine buyer, Daphne Teremetz and has flavours of ripe lemon, pear and apple. Having fallen out of favour with winemakers as demand for Sauvignon Blanc increased, this unique grape is making a comeback for 2018. According to Daphne: “It’s a great grape with loads of flavour and I think it will be popular with customers who like crisp, unoaked, dry styles of white wine.”’