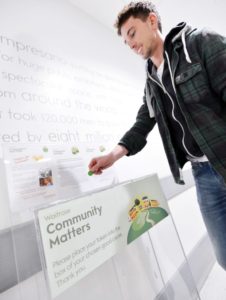 Under the initiative, shoppers are given a green token at the checkout to place in one of three boxes – each allocated to a different local cause. At the end of each month, a donation is shared amongst the three charities as a proportion of the number of tokens they’ve received. The scheme is also replicated online, with three national charities taking part every quarter.

Since 2008, the supermarket chain has donated more than £30 million to around 100,000 local and national charities and community organisations around the country.

To mark the anniversary, many branches are inviting in three local causes that have been popular with their customers over the years, to showcase the work they are doing in community. Many shops will also be holding celebrations for charities which have benefited from the scheme over the past decade.

Online, shoppers will be able to virtually cast their vote between now and November for three charities which have received the highest number of customer votes online since the scheme began: Alzheimer’s Research UK, Bowel Cancer UK and Contact the Elderly.

Waitrose & Partners head of sustainability and responsible sourcing Tor Harris said: “We’re very proud to able to play our part in the community and support those causes that matter most to our customers. We’d like to thank all the charities who have been part of the scheme over the past 10 years, as well as our Partners [staff] who do so much for their local communities.”

In addition to the ‘green token’ scheme, Waitrose & Partners provides staff volunteering hours each year. This has seen Partners give their time to help volunteer-run organisations, community projects and, at Christmas, festive lunches for people who would otherwise be on their own.

*Sales at Waitrose & Partners for last week (to Saturday September 29) excluding fuel were -2.1% compared to the same week last year.

The retailer’s commercial director Rupert Thomas commented: “Sunny but cold weather for much of the country drove sales of autumnal food. Slow cooked meat joints saw a boost – particularly beef and lamb – as did our range of stocks and gravies, which were up by 11% on this time last year.”

He added: “House plant sales were up by 50% as shoppers looked to bring some some colour into the home.”