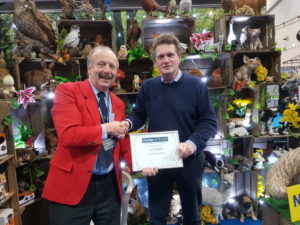 During the event, a contest for Best Display Stand was held, judged by an independent panel. Vivid Arts was the winner, earning the company’s south-west sales agent Nigel Trevelyan-Thomas a cash prize of £100, a certificate and a glass trophy.

Home Hardware chairman David Adams said: “Vivid Arts worked very hard on the presentation of their stand. It was well-lit, extremely eye-catching, and featured interesting products which were merchandised to a high standard.”

A draw held at the show raised £400 to be split equally between Cancer Research and The Rainy Day Trust. Home Hardware Southwest would like to thank all members, suppliers and staff who generously contributed to these charities.