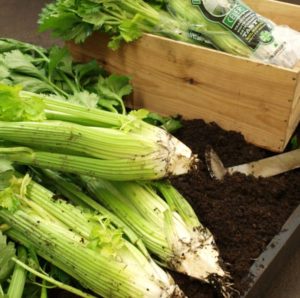 The supermarket chain’s customer director Martin George said: ‘Sharing dishes were popular with shoppers, with sales of our World Deli range up 27%, olives and antipasti up 10% and dips up 6%. Cheese was also on the menu, particularly local and regional varieties, which saw sales increase by 106%.

‘Root vegetables had a good week too, and last week we announced the launch of two Victorian vegetables to our range – Fenland celery and Salsify – in selected shops.’

According to the retailer, Fenland celery was extremely popular at Victorian Christmas markets in London and was a feature of the Victorian Londoner’s Christmas dinner. It is grown in flat deep peat fields of East Anglia using a traditional growing technique – wide rows with deep trenches and peated soil banked up around the celery (known as ‘earthing up’) – which protect the celery from frosts and blanching. This results in a celery that is ‘whiter than standard celery with a distinctive delicate, sweet and nutty flavour and a clean, crisp texture’. It is a British heritage ingredient and was the first English vegetable to be awarded a PGI (Protected Geographical Indication) status in 2013.

Waitrose & Partners said that Salsify is ‘a versatile vegetable with a unique flavour and texture, similar to a mild artichoke with a trace of liquorice or, when cooked, some even claim to detect a hint of oysters’. Salsify has two varieties: black, which is grown in Cambridgeshire, and a small amount of white salsify, which is grown in the sandy soils of Ayrshire. This will be the UK’s only crop and is harvested between September and December, with product being available into the New Year.

Gary Grace, vegetable buyer at Waitrose & Partners explained: “We are excited to be introducing both these Victorian vegetables to our range in a select number of our branches. Both Salsify and Fenland celery are largely forgotten vegetables that were favoured in Victorian England due to their versatility, especially during the winter months. Over recent years we’ve seen many of the traditional cuts of meat come back into favour, and we hope that customers will feel the same about Salsify and Fenland celery and enjoy these vegetables once again.”

Last week the grocer also launched the first two of six Christmas TV adverts, each celebrating the role that food plays during Christmas festivities. Central to the campaign, called ‘Too Good To Wait’, is the concept that Christmas is about ‘enjoying great quality food with the people who matter most’.