22nd May 2019 News Comments Off on Vegan food firm launches petition to get ‘BVQ’ added to dictionary 1,034 Views 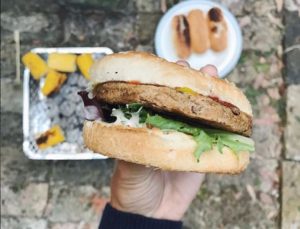 Vegan food company Fry Family Food Co. has launched a petition to get the term barveque (BVQ) added to the Oxford English Dictionary, as a plant-based alternative to a typical, and often meat-based, British BBQ.

The Oxford English Dictionary defines the word barbecue (BBQ) as a ‘meal or gathering at which meat, fish, or other food is cooked out of doors on a rack over an open fire or on a special appliance’.

Fry Family Food Co. said: ‘The definition contains both the words ‘meat’ and ‘fish’, but no mention of the plant-based alternatives enjoyed by vegans all over the world. The proposed new term barveque (BVQ) is defined as  a meal or gathering at which solely plant-based or vegan food is cooked out of doors on a rack over an open fire or on a special appliance.’

Tammy Fry, international marketing director at Fry Family Food Co. said: “For many people, barbecues are an essential part of the British summer. However, for people who follow a plant-based lifestyle, it’s not always the event it could be. As vegan barbecue experts, we know there is just as much fun to be had at a BVQ as a BBQ. There are so many fantastic meat alternatives now available on the market, so we think it’s time for the Oxford English Dictionary to put the ‘V’ in BBQ and acknowledge the growing trend of plant-based barbecues worldwide.”

“If this petition reaches 5,000 signatures, we will take it to the Oxford English Dictionary and appeal to them to include this new term, in celebration of vegan barveques worldwide.”