üutensil founder gets on his bike for children’s charity

10th May 2017 News Comments Off on üutensil founder gets on his bike for children’s charity 1,626 Views 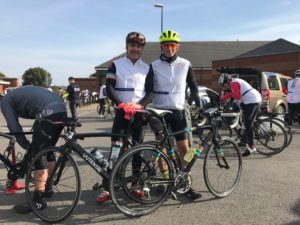 üutensil founder and designer Gavin Reay took to the roads in London on May Bank Holiday weekend, as part of his aim to cycle 1,500 miles this year to raise £1,500 for a good cause.

He was pedalling for the young people’s learning disabilities charity Halow, which counts former Formula One driver Damon Hill as a trustee and founder member (his son Ollie is the ‘o’ in Halow). His personal challenge was to cycle 250 miles in 48 hours.

Gavin said: “The weather turned a bit wintry on us before we set off, but that just made it all the more fun. I’ve already had great support from colleagues in the industry but any further donations would be gratefully received, and will all help with the excellent work that Halow does to help young people with learning disabilities live independently.

Gavin has already raised £1,100 of his total. To make a donation, please go to Gavin’s Virgin Money Giving page http://uk.virginmoneygiving.com/GavinReay.

The inspiration for Halow came from five young people’s names: Harriet, Amber, Laura, Oliver and William, each having a learning disability.  Their parents, all friends, came together  in early 2006 concerned with the prospect for their children’s future and others like them. Passionate that these young people should lead positive and happy lives near their own friends and families in Surrey, the parents established the Halow project.