Two Jack’s stores open in Cheshire and the Midlands

18th October 2018 News Comments Off on Two Jack’s stores open in Cheshire and the Midlands 2,104 Views 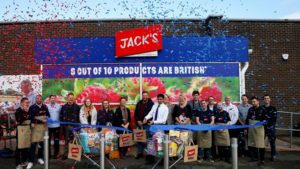 Two more Jack’s stores opened today on October 18 at Middlewich in Cheshire and Rubery in the Midlands.

Part of the Tesco family, Jack’s is a new brand named after the supermarket chain’s founder Jack Cohen, which offers food and drink products that are 80% grown, reared or made in Britain. The launch of Jack’s is part of Tesco’s centenary celebrations.

The first two stores opened on September 20 at Immingham in Lincolnshire and Chatteris in Cambridgeshire. Two more stores followed at Edge Hill and St Helens in Merseyside on October 4. Over the next six months, Tesco plans to launch 10 to 15 Jack’s stores in the UK.

The shops stock an own-brand range called Jack’s, along with some familiar grocery brands and a range of general merchandise on a ‘When it’s Gone, It’s Gone’ basis. They operate a low-cost business model designed to keep costs low and prices down, described as ‘a no fuss approach, with no fancy fixtures or fittings and no added extras’.

Tesco said Jack’s will play a key part in the local community. The ‘Jack’s Supports’ initiative will ‘give back’ by funding local projects using money raised by the sale of carrier bags.

Soon Jack’s will be inviting charity groups and good causes to apply to be part of the scheme. Once applications are submitted, they will be reviewed by Jack’s staff who will create a shortlist of four good causes for each store. Each of the four will receive a donation of £250.

Voting will then begin in-store, with the winner receiving carrier bag proceeds from their local store for a three month period. This will be a guaranteed minimum of £500. Interested groups can find out more at jacks-uk.com/jacks-supports.

The Jack’s stores will also take part in Tesco’s Community Food Connection scheme. Working with UK food redistribution charity FareShare, this project ensures that any unsold food safe for human consumption is offered to local charities and community groups for free at the end of the day.