Trump merchandise flying off shelves at Poundland for Halloween

26th October 2017 News Comments Off on Trump merchandise flying off shelves at Poundland for Halloween 1,938 Views 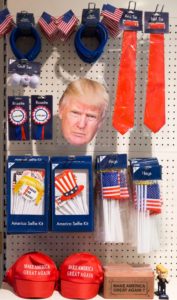 Since calling on bargain hunters to help shift its limited edition Donald Trump range of products, in light of the US president’s cancelled state visit to the UK, Poundland has confirmed that over 40,000 products have been sold nationwide.

Chris Wall, trading controller of the 900-strong discount chain, said: “The Trump range is perfect for Halloween – it’s the most frightening range we’ve ever sold. With shoppers able to purchase anything from the range for just £1, it’s easy to shock your friends as the POTUS at this year’s Halloween party.”

The president’s red ‘Make America Great Again’ cap is the best-selling item, with more than 8,500 flying off shelves since launch. The full Donald Trump merchandise – in order of most purchased – is:

In addition to the Trump range, a zombie stretch mask is proving to be the most popular Halloween choice for fancy dress, with 150,000 pieces sold to date, closely followed by vampire and spooky make up kits.

Brits are also ensuring that their houses look the part for the year’s spookiest night, with over 100,000 pumpkin and skull ceramic tealights sold so far, alongside Day of The Dead themed decorations.