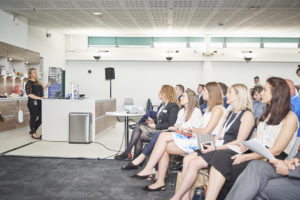 Organised by Brooke House Exhibitions, the co-located Exclusively Housewares and Exclusively Electrical shows ran on June 13 and June 14 at the Business Design Centre in London.

New for 2017 was a ‘press showcase’ of key product launches and ranges, aimed at attracting key consumer press and bloggers. More than 50 journalists attended, with more requesting a post-show brief on the showcased brands.

Also introduced was a display area dedicated to trends, which featured a curated selection of ‘on trend’ products from exhibitors.

Sponsored by BHETA (British Home Enhancement Trade Association), this project was co-ordinated by Scarlet Opus: a trend forecasting consultancy which has worked with the shows for several years.

Scarlet Opus ran guided tours of the shows highlighting the ‘on trend’ products, which were were taken by visitors including John Lewis, B&Q and the BBC licensing team.

BHETA also sponsored a seminar programme on the theme of ‘the kitchen of the future’. Visitors were given the opportunity to view examples of emerging kitchen technology such as a Samsung fridge with interior cameras, a remote-controlled oven and the very latest induction hob.

Show director Simon Boyd said: “We had tremendous support for our new initiatives and will be looking, as always, to build on this for next year.”

In 2018 Exclusively Housewares and Exclusively Electrical will take place on Tuesday June 12 and Wednesday June 13 at the Business Design Centre in London.