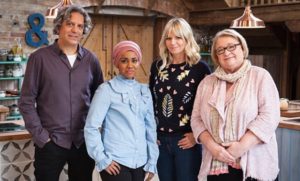 The first episode of BBC2’s new cookery competition ‘The Big Family Cooking Showdown’ will air on Tuesday August 15 at 8pm, according to the TV and radio listings guide Radio Times.

Presented by 2015 Bake Off winner Nadiya Hussain and Zoe Ball, the 12-part series will delve into kitchens across the country in search of Britain’s best family of cooks.

Judging the contestants’ efforts are cookery teacher Rosemary Shrager and Michelin-starred chef Giorgio Locatelli. The pair will set challenges in both the studio kitchen and home kitchens, whittling down 16 teams of cooks over eight heats, three semi-finals and one grand finale.

In each episode, two families (represented by three family members) will go head to head, tested by three rounds.

The Art of Joyful Gifting by Denby

In a little over two weeks, I will be starting a non-stop 84-mile hike from …