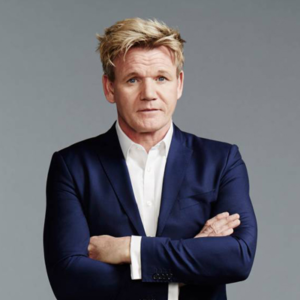 ‘Culinary Genius’ is a competitive cookery show, described by the broadcaster as ‘an entirely original format, mixing food with game show and cooking elements’.

Hosted by TV presenter Fern Britton, the 20-part series is a Studio Ramsay production and will air soon on ITV.

Each hour-long episode will see nine amateur cooks enter a wrestling ring-style studio to compete in three rounds of tasks.

A different professional chef will preside over the kitchen each week, demonstrating two of the three tasks to the competitors, as well as the audience at home.

Gordon will be first to take to the floor, followed by Rosemary Shrager, Jean-Christophe Novelli and Phil Vickery.

Gordon said: “‘Culinary Genius’ is an amazing format that just got elevated to another level with the involvement of these fantastic British chefs as judges and Fern as host. I’m excited for the viewers and contestants to be a part of the ‘Culinary Genius’ Arena.”

Battle One will see the contestants face a five-minute knife skills test. They will be challenged to speedily chop ingredients before being judged by the professional chef on quality as well as quantity. The three weakest contestants will be immediately eliminated.

Battle Two focuses on precision and skill. This 10-minute test is all about preparation as a carefully chosen ingredient is revealed to the remaining six competitors and they race to prepare it perfectly.

Three more hopefuls will be sent home, leaving the remaining trio to face a cook off in Battle Three.

Here the chefs must use the ingredient they just prepped – and the studio’s stocked larder – to create a dish worthy of taking home the cash prize and the title ‘Culinary Genius’.

Rosemary Shrager said: “I’m delighted to be part of this brand new, exciting cookery show. I look forward to putting the keen cooks to the test and finding a few culinary geniuses amongst them.”

Jean-Christophe Novelli added: “I’m so excited and proud to be part of this revolutionary new show promoting the hidden cooking skills from around the country. It’s going to be phenomenal.”

Phil Vickery commented: “I’m really pleased to be involved in such a high-profile cooking show. This is serious cooking that will test contestants to the limit and is not for the faint-hearted. I can’t wait to get started!”