23rd April 2019 News Comments Off on Tony Grimshaw of What More UK presented with Freedom of the City of London 1,592 Views 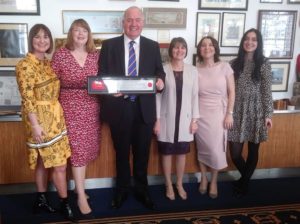 Tony Grimshaw OBE accepted the Freedom of the City of London honour on April 12.

The director of housewares supplier What More UK said he was “extremely proud as a Lancastrian” to attend the ceremony of declaration, held in the Chamberlain’s Court at Guildhall at London.

Tony was escorted to the Court by the Beadle, who wears a top hat and frockcoat. The ceremony was performed by Laura Miller, Deputy Clerk to the Chamberlain’s Court, on behalf of the Chamberlain.

Tony was invited to read the ‘Declaration of a Freeman’ and sign the Freeman’s Declaration Book.  The Copy of the Freedom – a parchment document with Tony’s name inscribed by a calligrapher – was then presented to Tony, together with a copy of the ‘Rules for the Conduct of Life’ which date from the mid-18th century. The Deputy Clerk then extended the right hand of fellowship to Tony and greeted him as ‘a Citizen of London’.

The Freedom of the City of London was, in the earliest times, an essential requirement for all who wished to carry on business and prosper in trade with in the Square Mile. As a result, the privileges attaching to the Freedom were eagerly sought, while the duties and obligations of freemen were faithfully observed. It is one of the oldest surviving traditional ceremonies still in existence today and is believed to have been first presented in 1237.

Prior to 1996, the Freedom was only open to British or Commonwealth citizens. Now, however, it has been extended globally and persons of any nationality may be admitted either through nomination or by being presented by a livery company.

The City of London is keen to maintain the Freedom as a living tradition. The Freedom is open to all who are genuinely interested and invited or born to it and is still closely associated with membership of the City livery companies. Tony is a Freeman in the Worshipful Company of World Traders.