Tom Kerridge stars in ‘Top of the Shop’ 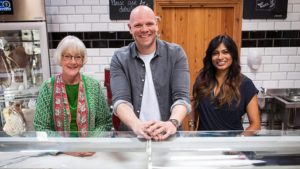 ‘Top of the Shop’ is an eight-part series in which food producers with fledgling businesses from across Britain promote and sell their wares over two days in a real shop. at Malhamdale in the heart of the Yorkshire Dales.

The show gives the producers an opportunity to showcase their food to customers – as well as two expert judges (food writer and restaurateur Nisha Katona and The School of Artisan Food founder Alison Swan Parente) – as they attempt to convince them that their product is the best and deserves a permanent space on our shelves.

The broadcaster said: ‘Britain is in the midst of an artisan food revolution and this series celebrates the craft of making delicious things. From home brewing, smoking meat, hand-made cheeses and chocolates to chutneys and preserves, foodie enthusiasts can’t get enough of food that is created with natural ingredients, bold flavours and rediscovered traditional methods.’

At the end of the series, the shop will be filled with the seven winning products from seven different categories. The judges will ask the locals to help them one last time to decide which producer and product is the ‘top of the shop’ overall.

Tom said: “The huge rise in interest around artisan food products in this country has been phenomenal over the past few years. This has led to a great many more amateur food lovers having a go at making goods themselves with some outstanding results.”

In episode one, which airs at 8pm on Tuesday (April 17), four contestants will test out their products on the locals. This time, makers of preserves, pickles and spreads will battle it out for one place in the final.

Sara makes apple and chilli jelly from her back garden in a west London street, using home-grown apples. Louise from Brighton has a much-loved family recipe for Filipino papaya pickle. Couple Linzi and Jason from Dorset will promote their homemade peanut butter, while retired florist Pam and her daughter Emily will show their runner bean chutney, homegrown from their garden in Herefordshire.

Tom will meet members of the local community as they try the unusual preserves. Meanwhile, the judges will visit the contestants at home to see how well their products are made, and assess whether their creations have what it takes to sustain a profitable business. The winner is the fledgling business that is most viable and deserving of the title of ‘best up and coming artisan’.