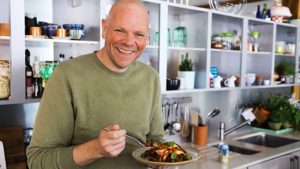 ‘Lose Weight For Good’ is a tie-in to the Michelin-starred chef’s recent BBC Two series, which filmed Tom as he mentored a group of struggling dieters and aimed to prove they could ‘lose weight for good’ by following his low-calorie recipes. His cookbook has been in the top 10 for the past eight weeks.

At number two is ‘The Fat Loss Plan’ by health and fitness expert Joe Wicks, which features 100 recipes and five speedy workouts.

At number three is ‘5 Ingredients – Quick & Easy Food’ by Jamie Oliver, which includes more than 130 recipes from the celebrity cook for ‘quick and easy’ cooking, using five ingredients.

At number four is ‘Classic’ by Mary Berry, which lists 120 ‘no-fuss recipes for classic dishes’ from the cookery queen’s new six-part BBC One series, which starts today (Monday February 26) at 8.30pm.

At number five is ‘The Hairy Bikers’ Mediterranean Adventure’. This tie-in to the cookery duo’s recent BBC Two series of the same name celebrates the cuisines of France, Spain and Italy, with ‘150 feel-good recipes for a taste of the sun every day’.

The manuals list was published in ‘The Sunday Times’ ‘Culture’ magazine on February 25. The list was prepared by and data supplied by and copyright to Nielsen BookScan, taken from the TCM for the week ending February 17.