The sixth baker leaves the tent

5th October 2017 News Comments Off on The sixth baker leaves the tent 1,605 Views 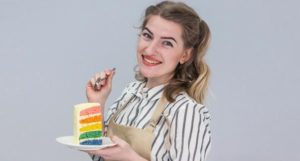 In Tuesday’s episode of ‘The Great British Bake Off’ on Channel 4 (October 3), Liam was named Star Baker for the first time, and Julia was the sixth baker to exit the show.

Julia, aged 21, lives in West Sussex. Originally from Siberia, she met her British husband on holiday in Turkey when she was 17. She taught herself to bake from a young age. However, whenever she wanted to bake, she would have to save up money from her after-school job to buy the ingredients.

After moving to the UK, Julia dreamed of applying for ‘The Great British Bake Off’ and spent three years practising and studying British bakes in particular, so she would acquire the knowledge and skills needed.

She said: “I knew that I wouldn’t win or get to the Final, but I enjoyed every week, and to get to over half way through the series is something I’m really grateful for. I enjoyed every minute of it, and would love to do it again now I have the knowledge of how it all works!

She added: “It was a huge honour to be in the tent. At the end of the episode [Bake Off presenter] Sandi [Toksvig] was very upset when she announced I was leaving, and she gave me a big hug. We both shared a few tears and then [fellow presenter} Noel [Fielding] rallied me round. I didn’t want to go of course, but everyone has to leave sometime, and I knew that was my week to go.

“Of course I will carry on baking: it’s my passion and I’m very lucky to find my passion in something I absolutely love. I’m only 21 and there’s only one place to go now, and that’s up.’

The theme of Tuesday’s episode was Pastry Week. The seven bakers faced a ‘signature challenge’ to make four individual themed shortcrust pies of any flavour, which had to be connected in some way by decoration .

The ‘technical challenge’ was to make12 pastéis de nata. These are Portuguese tarts that comprise puff pastry cases with a swirl on the bottom, filled with smooth, creamy, slightly mottled custard.

The ‘showstopper challenge’ was to create a family size pie of any filling with a hot water crust pastry case, topped with fruit to complement the filling inside.

The theme of next week’s episode, which airs on Tuesday October 10 at 8pm, is Italian Week. Channel 4 has hinted that the remaining bakers will face ‘a deep fried Sicilian signature, a technical takeaway – and the most demanding pastry showstopper that the Bake Off has ever seen’.