The Hairy Bikers head to the Med 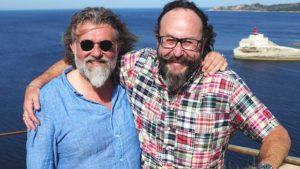 The Hairy Bikers are on their bikes again, discovering food from Mediterranean countries in a new BBC Two series.

Si King and Dave Myers celebrate the culinary delights of France, Spain and Italy in the six-part show.

In episode one of ‘The Hairy Bikers’ Mediterranean Adventure’, which airs tomorrow (Thursday January 4) at 8pm, the celebrity cooks go off the beaten track in search of authentic flavours of Italy, from simple, local ingredients to spicy n’duja pate and ‘some of the best gelato to be found’.

In episode two, which airs next Thursday (January 11) at 8pm, the bikers begin their Sardinian adventure in the small town of Cagliari, where everyone is in high spirits for the feast of St Efisio. The pair join in the fun by cooking a local speciality: almond and orange cakes.

They then head west to meet the tuna fishermen of Carloforte. Here, tuna is known as the ‘pig of the sea’ and nose-to-tail eating is the norm. After seeing the locals’ unique form of fishing, the bikers meet a chef who serves up platters of tuna treated the Carloforte way.

The duo’s next stop on their quest to find the ‘real’ Sardinia is a mountain-top campsite where they see how a group of shepherds make ‘Sa Ventre’, which BBC Two describes as ‘a kind of sheep’s black pudding’.