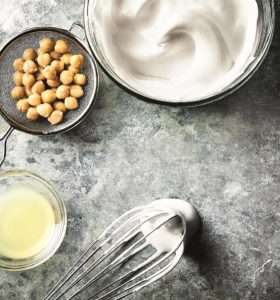 Channel 4 series ‘The Great British Bake Off’ tackled Vegan Week for the first time ever on Tuesday (October 9), with contestants throwing out eggs and butter to create a ‘savoury pastry Signature without butter, a cracking Technical and a risky but spectacular Showstopper’.

In light of Vegan Week, Waitrose & Partners has announced the exclusive launch of Porcini Mushroom Powder (£3.49).The ingredient, which is part of the Waitrose Cooks’ Ingredients range, is suitable for adding a savoury and umami flavour to a range of sweet treats including fudge.

Waitrose Cooks’ Ingredients buyer Oliver Chadwyck-Healey commented: “Like most of the nation we’re avid fans of ‘The Great British Bake Off’ and it’s not surprising that the show incorporated a Vegan Week this year. Baking without the use of eggs and dairy can be quite difficult but we’re hoping to make things a little easier by expanding our vegan ingredients at Waitrose.”

The supermarket chain noted that chickpeas can also be used in vegan baking, providing an alternative for white flour when dry, and eggs when mixed with water and left to thicken. The retailer said: ‘It’s no real surprise that sales of canned chickpeas are up 14% – where the aquafaba (the viscous water in which chickpeas have been cooked) can be used to make meringues – thanks for the tip, GBBO!’

This year, Waitrose has increased its vegan offering by 60%, introducing additions from vegan cheese and butter to ready meals, yoghurts and cakes. The range is proving popular with sales on average up by 88% year-on-year.

Customers are also able to try making their own vegan bakes at home, taking inspiration from the Waitrose website where the search for ‘healthy vegan recipes’ is up 372% month-on-month and searches for ‘vegan cakes’ have climbed by 350% over the past five years.