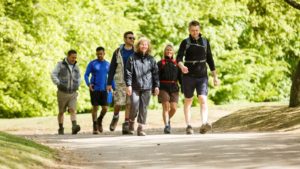 Thousands of Tesco colleagues have now walked over half the length of the UK to raise funds and awareness for Diabetes UK and the British Heart Foundation (BHF).

The Great Tesco Walk is a month-long trek between Land’s End and John O’Groats to raise funds for the supermarket chain’s partnership with the health charities.

Staff from across the country set off on September 5 and will to walk in relay to October 5, with the aim of adding to the £21 million already raised since the partnership began in 2015.

The route is broken down into 51 ‘legs’ of 5km, 10km, 25km and 50km and has been designed to take in as many Tesco stores and distribution centres as possible. It will pass around 150 stores along the way. Separate walks are taking place in Wales and Northern Ireland.

So far, more than 2,000 Tesco colleagues have walked over 1,200km in two weeks, along with MPs and the charity partners with hundreds of thousands of pounds already raised. The walk reached Scotland (September 24) on Sunday, crossing the Forth Bridge yesterday (Wednesday September 27), and will finish in John O’Groats next Thursday (October 5).

Tesco staff in stores up and down the country have also been walking ‘miles in the aisles’ and customers can round up their bill to the nearest 10p at Tesco until the end of the walk to support the charities.