29th November 2017 News Comments Off on The Great Christmas Bake Off & The Great Festive Bake Off bakers revealed 1,769 Views 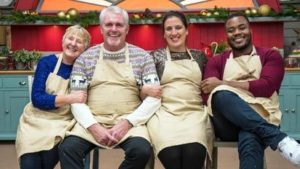 Channel 4 will broadcast two special episodes of ‘The Great British Bake Off’ during the festive season.

In each episode, four former bakers from previous series will return to go head to head in three seasonal challenges to find out who will top the tree as Star Baker.

In ‘The Great Festive Bake Off’, bakers Benjamina Ebuehi, Rob Billington, Rav Bansal and Sandy Docherty will come back to create ‘something to celebrate’ in three challenges.

‘The Great Christmas Bake Off’ and ‘The Great Festive Bake Off’ will air during the festive season but the dates and times are to be confirmed.

The Great Christmas Bake Off Quartet

GBBO highlight: Beca’s macarons were described as ‘exquisite’, which subsequently lead to her nickname ‘Becaron’

GBBO highlight: Selasi’s cool and calm approach to each challenge saw him through to the semi-final

GBBO highlight: Val’s dancing whilst baking and emotional goodbye speech. She said “When you bake, you always bake for a reason. You’re giving it to people, so you make it best you can. And you make it with love”

The Great Festive Bake Off Quartet

Job: Pursuing a career in food

GBBO highlight: Being much loved for her flavoursome bakes

GBBO lowlight: When his chocolate cake slid onto the floor at the end of a challenge – and when his custard meringue pie collapsed

GBBO highlight: Known for his exotic and experimental fusion of flavours

GBBO highlight: Her performance of the ‘wobble dance’

The final episode of series eight of ‘The Great British Bake Off’, which aired on October 31, pulled in its biggest audience of the series with 7.7 million viewers – making it Channel 4’s biggest overnight performance in five years (since ‘The Paralympic Games Opening Ceremony’ in 2012). The audience peaked with 8.9 million and a 37.9% share of audience.

The finale attracted an average of 2 million 16-34 year old viewers. At the time, the broadcaster said: ‘Bake Off has become the biggest series for young audiences on any channel this year, averaging 2.5 million viewers (a 54% share of audience) per episode’.

‘The Great British Bake Off’ also achieved a record digital performance, becoming All 4’s biggest ever title, averaging 1.7 million views per episode on the on-demand channel.

Channel 4 ceo Alex Mahon said: “It’s testament to the phenomenal appeal of ‘The Great British Bake Off’ that almost nine million people watched Sophie Faldo triumph as Channel 4’s first ever Bake Off winner – a fitting finale to the most watched series for young viewers on any channel this year.

“Love Productions, along with [judges] Paul Hollywood and Prue Leith and hosts Noel Fielding and Sandi Toksvig, served up a showstopper of a series – and I’m delighted that they’ll all be back in the bakers’ tent on Channel 4 next year.”