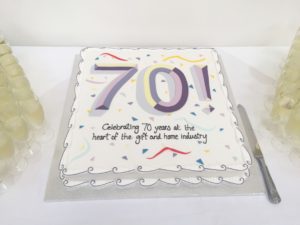 The Giftware Association celebrated its 70th birthday at its members’ day and AGM last Wednesday (June 21) in its home town of Birmingham at Fazeley Studios.

The AGM held in the morning was one of the best-attended to date, drawing more than 125 members and non-members.

In the afternoon, delegates listened to presentations from speakers including Andy Powell, who is vice-president for UK cyber security at Capgemini, and customer service and marketing expert Geoff Ramm, followed by a networking afternoon tea.

GA chairman Henri Davis then updated the audience on the Association’s achievements over the past year. The list included a presence at more trade fairs and the launch of a rebrand including a new website, literature and show signage.

She also referred to the success of two GA’s initiatives: an inaugural ‘Meet the Buyer’ day held with a team from The Tillington Group of Garden Centres and the Gift Of The Year 2017 Awards, which attracted “a huge number of non-members applying and new companies entering”.

During the evening, guests commemorated the GA’s birthday with a drinks reception, grand cake cutting, BBQ, band and dancing until the early hours.

Commenting on the proceedings, GIA ceo Sarah Ward said: “Everyone loved the day. It was great to meet with new and potential members to give them a taste of what we are all about and how we can help their businesses.”