‘The Big Family Cooking Showdown’ is on its way 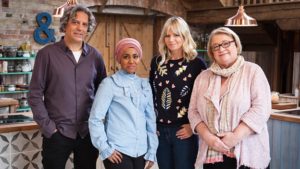 This major new competitive show of 12 one hour episodes will delve into kitchens across the country in search of Britain’s best family of cooks.

They will set challenges in both the studio kitchen and home kitchens, whittling down 16 teams of cooks over eight heats, three semi-finals and one grand finale. In each episode, two families (represented by three family members) will go head to head, tested by three rounds.

The series is presented by Nadiya Hussain and Zoe Ball.

Nadiya, who was crowned winner of the 2015 series of ‘The Great British Bake Off’, has worked on a number of BBC projects recently. She has made films for ‘The One Show’ and presented ‘The Chronicles Of Nadiya’ in 2016. She also fronted her own cookery series ‘Nadiya’s British Food Adventure’ this summer. She said: “Having been through a food competition as an amateur cook myself, I know exactly how tough it can get and so I’ll be there for them, alongside Zoe, as the pressure really builds.”

Zoe is one of TV and radio’s best known presenters, currently presenting on BBC Radio 2 and BBC Two’s ‘Strictly Come Dancing: It Takes Two’. She commented: “It’s time to celebrate passionate foodie families all over the country and this series will show us home cooking at its best, even if it’s using old pans and mismatched crockery! We’re meeting 16 very different families over the course of the show and witnessing their team dynamics.”

Judge Rosemary is an accomplished chef who recently appeared on BBC series ‘The Real Marigold Hotel’ and ‘The Real Marigold on Tour’. She is also an experienced judge, having featured on ‘The Chopping Block’ and ‘Rosemary’s School for Cooks’.

As a judge, Rosemary is looking for a family with food at its heart that shares both the kitchen duties and recipes between the generations. She said: “It’s wonderful to be meeting families with their own recipes and to be judging good honest family food. I’m hoping to be inspired and surprised by the dishes that these families cook at home to put a smile on each other’s faces.”

Meanwhile, Giorgio has fronted several TV series including ‘Tony and Giorgio’, ‘Sicily Unpacked’ and ‘Italy Unpacked’ on BBC Two. He runs a restaurant in London and was recently awarded the Commendatore OMRI by the Italian Ambassador for services to Italian gastronomy.

He commented: “I strongly believe that cooking at home is at the base of healthy family relationships. For Rosemary and me to be given the opportunity to taste people’s family dishes within their homes is such an honour.” As a judge, Giorgio is particularly looking forward to experiencing the different families’ heritages through the dishes that they serve.

A transmission date for ‘The Big Family Cooking Showdown’ has not yet been revealed.