Tesco to offer vegan foods in the meat aisle 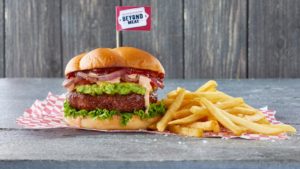 From this month, flexitarians (who eat both meat and plant-based alternatives) will be able to find both next to each other in a new fixture in the meat aisle at larger Tesco stores.

The supermarket chain said the move comes as more and more Brits reduce their meat consumption, either turning to a vegan or vegetarian diet or becoming flexitarian.

The retailer claims that as a direct result of this and the popularity of campaigns like ‘Meat-Free Mondays’, 21% of UK households have reduced their meat intake (Kantar Worldpanel April 2018) and 1% of all households include a vegan, 5% a vegetarian and 10% a flexitarian (Kantar Worldpanel Feb 2019).

Tesco director of plant-based innovation Derek Sarno said: “The rise of eating more plant-based food and people becoming flexitarian is having a massive effect on the way many people shop and as a result the retail industry is having to adapt.

“We are seeing a new kind of shopper – more conscious of their own health and the environment and perfectly happy to make dietary changes such as becoming vegan, vegetarian or flexitarian to achieve those aims.

“Plant-based alternatives in general have become so high in quality that most life-long meat eaters are now including these foods as part of their diet. It makes sense to range them next to each other in the same aisle and bring a wider breadth of options available to choose from.”

Included in the new fixture are vegan and vegetarian food products by established brands such as Heck, Vivera, Beyond Meat and Vegetarian Butcher.