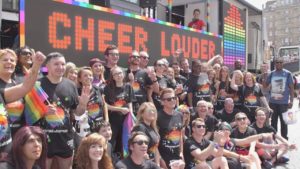 LGBT+ groups across Britain will be celebrating Pride with the chance to bag themselves a share of over £75,000.

The community groups and charities are all taking part in the latest round of Tesco’s community grant scheme Bags of Help.

The initiative, which is run in partnership with environmental charity Groundwork, sees the money raised from the sale of Tesco carrier bags awarded to thousands of local community projects every year.

To commemorate Pride, the supermarket chain is putting a special focus on LGBT+ groups in London, Brighton, Manchester, Cardiff and Glasgow. They include a performing arts project for young LGBT+ people under 19, a group who support transgender children and their parents, and an intergenerational community garden.

Voting is open in selected stores in the five cities throughout July and August. Customers will cast their vote using a token given to them at the checkout each time they shop.

Alec Brown, Tesco’s head of community, said: “To celebrate Tesco’s long-running support of LGBT+ Pride events across the country, the latest round of voting in Bags of Help will put a special focus on the LGBT+ community.

“We are very proud to be supporting a wide range of groups and charities that are doing amazing work to support, empower and celebrate their local LGBT+ communities.

“Bags of Help has already reached thousands of community groups and organisations across Britain and shows no sign of slowing as it goes from strength to strength. The wonderful thing about Bags of Help is that groups are voted for by our customers in the communities we serve.”