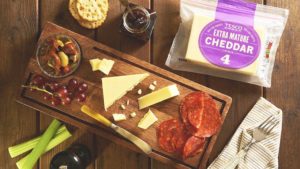 Tesco shoppers have made history by creating the UK’s first ever commercially produced bespoke Cheddar cheese.

The move came after the retailer called on customers – and British cheese producer Parkham Farms – to help create a Cheddar cheese ‘to delight and satisfy the palates of today’s cheese lovers’.

After researching cheese flavour profiles and reviewing cheese-making techniques with the North Devon cheesemaker, the supermarket chain has come up with what it believes is the best-tasting mature and extra mature own-brand Cheddar cheese in the UK.

Tesco cheese expert Kay Legge, who oversaw the project, said: “The British palate is changing and in the last five years we’ve seen a dramatic shift from mild to stronger tasting Cheddar as the UK’s favourite cheese.

“For over 50 years spicier foods have become more common in our diets, and as our taste buds have acclimatised to the flavours, we see that customers now have a hankering for a deeper and more complex taste profile for their cheese.

“Involving some of our customers in the cheese-making process has been really helpful. They obviously have great taste – as both varieties have won gold medals at two major cheese events and demand has continued to soar.”

Since the new cheeses launched last autumn, demand for Tesco’s Extra Mature has rocketed by 40% and Tesco Mature has grown by 6%.

Tesco’s Mature and Extra Mature Cheddars are made by Parkham Farms: a family business specialising in fine cheeses made from milk produced on the farm itself, using traditional creamery methods.