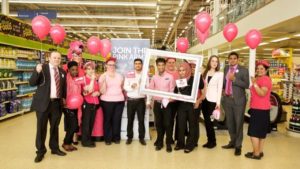 Tesco and Cancer Research UK announced yesterday (Wednesday April 26) that the retailer has raised more than £40 million for the charity over the last 16 years, making the charity partnership one of the biggest ever in the UK.

Over £20 million of the total has been raised through Tesco’s sponsorship of Race for Life, which is Cancer Research UK’s biggest annual fund-raising initiative.

Race for Life is a series of women-only events held to raise money for research into all 200 types of cancer. Since 1994, women of all ages and fitness levels across the UK have come together to walk, jog or run for the charity.

This weekend, Tesco will turn pink to support Race for Life. Thousands of Tesco colleagues will be wearing something pink in an effort to raise money for the cause.

Volunteers from the charity will be invited into Tesco stores to fund-raise, while in 200 F&F stores, customers will be able to donate their pre-loved clothing, shoes and accessories to Cancer Research UK to sell in its shops.

Nick Gaynor, executive director of philanthropy and partnerships at Cancer Research UK said: “We are overwhelmed by the fantastic support Tesco and their colleagues have given us over the last 16 years and thank everyone who has contributed to achieving this amazing total of £40 million.

“With Tesco’s support, our scientists have been able to continue our work to look at how we can prevent people from getting cancer. We know that four out of ten cancers are linked to preventable causes and thanks to our partnership with Tesco, Cancer Research UK researchers and clinicians are making great progress and bringing forward the day when we will beat cancer.”

Lindsey Crompton, head of community at Tesco, added: “At Tesco we’re committed to helping our customers and colleagues live healthier lives, and our longstanding partnership with Cancer Research UK has played a hugely important role in that.

“The amount of money raised over the last 16 years is testament to the hard work of colleagues, suppliers and volunteers, as well as the fantastic generosity of our customers.

“It’s great to see the funds being put to such good use in research projects which will hopefully have a lasting effect as part of the fight against cancer.”