5th April 2018 News Comments Off on Tesco gives away over 30 million pieces of free fruit to kids 1,458 Views 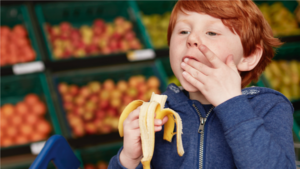 Tesco’s ground-breaking ‘Free Fruit for Kids’ initiative has proved a real hit, with over 50 million pieces of free fruit given to children since the programme launched almost two years ago.

The scheme was the brainchild of Maria Simpson, a Tesco colleague from Brigg Superstore in Lincolnshire, who suggested giving free fruit to parents for their children to eat during shopping trips as an alternative to sweets.

The idea was taken up by the store and was so well received by customers that Tesco decided to launch it nationwide. The initiative is now running in 800 stores across the UK.

Maria commented: “Over 50 million? Wow! This means that children across the UK have had a healthy and free piece of fruit from Tesco over 50 million times! It’s incredibly humbling for me to know that children are benefiting from this. They love it and the parents love it too.”

According to research conducted last year by the supermarket chain and parenting website www.Mumsnet.com, a third of parents said their children have eaten more fruit thanks to the scheme. Three-quarters of parents said the initiative made their shopping trip easier.

Tesco said the nation’s children are opting for bananas as their preferred free healthy snack, with over 21 million bananas snapped up, followed by 19 million apples and 10 million oranges.

The initiative is part of Tesco’s drive to help make it easier for colleagues and customers to eat more healthily through its Little Helps Plan.

Earlier this week, the retailer confirmed that all of its own-brand soft drinks fall below the government’s new sugar levy, after a decade of work with its suppliers to reformulate and reduce sugar content in soft drinks. Tesco achieved this feat 17 months before the levy comes into effect.

Tesco chief customer officer Alessandra Bellini said: “I’m incredibly proud that a simple idea from one of our colleagues has gone on to have such a big impact. Fifty million pieces of free fruit in two years will go a long way towards creating healthy habits that will stay with children as they grow up.”