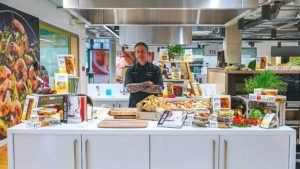 Demand for vegan food is rising so fast that it’s become the UK’s fastest growing culinary trend of 2018, according to Tesco.

In the last year, sales of chilled vegan foods at the supermarket chain have soared by 25%, helping to swell the UK meat-free market to £310 million.

As a result, Tesco is more than doubling its Wicked Kitchen plant-based food range, which launched earlier this year. The label was created by Tesco’s chef and head of plant-based innovation Derek Sarno. Included in the 26-piece new range are Wicked Kitchen’s crafted pies, ‘sausage’ rolls, sourdough pizzas, chilled desserts and deli foods:

Tesco product development director Kate Ewart said: “We know from our own data that flexitarianism is on the rise and many more customers are dabbling in cutting out meat for a day or so during their weekly diet.

“With the new range we’re hoping to attract an even wider audience including customers looking for on-the-go snacks such as a plant-based sausage roll, pie or pasty, as well as dessert lovers.”

The first batch of the 26 new Wicked Kitchen lines launched yesterday (Monday October 15). More will be launched in November and December in time for Christmas.