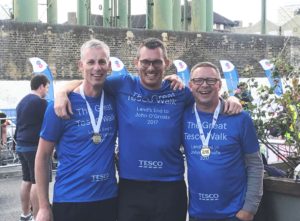 Thousands of Tesco staff have walked in relay from Land’s End to John O’Groats for charity.

The month-long event was held to raise funds for Tesco’s national charity partnership with Diabetes UK and the British Heart Foundation.

Overall the expedition is expected to have raised more than £1 million. The sum will help fund the work of Diabetes UK and the British Heart Foundation. It will also be used to support a series of online and community-based initiatives to help people make small, positive changes to their lifestyle to boost their health and reduce their risk of Type 2 diabetes and heart and circulatory disease.

Tesco UK ceo Matt Davies said: “I couldn’t be more proud of colleagues from across the UK who joined this fantastic event and raised important funds for our national charity partnership.

“I have loved joining colleagues at a number of walks and hearing the stories of others as the walk has made its way from Land’s End to John O’Groats. “Over the last few years we’ve managed to raise an incredible £21m for our national charity partnership. This event has again demonstrated our commitment and the wonderful spirit of Tesco colleagues in going the extra mile for these fantastic causes.”