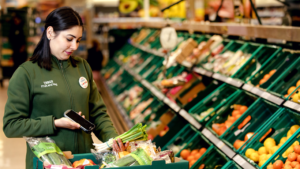 Tesco published its annual food waste data on May 14, revealing that 63% more food was redistributed to charities, community groups, colleagues and animal feed.

Overall, this led to the amount of food going to waste in Tesco’s UK operations falling by 17% to 44,297 tonnes (0.45% sales) compared with the previous year.

Tesco claims to be the first UK retailer to publish its own operations data in 2013. The latest figures have been achieved through several approaches including the rolling out of Community Food Connection, where Tesco works with charity FareShare to donate surplus food from its stores to those in need. Tesco is now working with almost 7,000 charities and community groups and has donated the equivalent of over 60 million meals.

Additional new measures have included the introduction of ‘Colleague Shops’, which sees staff take surplus food. On occasions where surplus food has not been taken by charities or staff, surplus is turned into animal feed, keeping it in the food chain.

As well as upping the amount that goes to good causes, Tesco has also worked more closely with its suppliers. The supermarket’s commitment to take the whole crop from growers – including unexpected bumper crops caused by the weather – led to more good food used in its Perfectly Imperfect and Waste Not ranges. Surplus grapes were used to create Hyke, an innovative new gin.

Tesco is also taking action to help its customers reduce food waste at home. The supermarket chain said customers reacted positively to Tesco’s decision to scrap ‘best before’ dates from over 180 fruit and vegetable products, ‘as it helps them keep perfectly good food for longer’.

Tesco ceo Dave Lewis said: “Reducing food waste is a global challenge: one in nine people is going hungry whilst a third of the world’s food is wasted. This food waste has a huge environmental impact, creating unnecessary greenhouse gas emissions.

“In 2013 Tesco set out to lead on reducing food waste globally and has committed to the Sustainable Development Goal Target 12.3, to halve global food waste by 2030.

“Publicly reporting food data is crucial to delivering on this ambition. Our food data shows we’re making progress in reducing food waste in our business. We set a challenging target that no food safe for human consumption would go to waste in our UK operations and we are now 81% of the way there.

“We call on other businesses to also report their food waste data; this is the only way that we’ll know whether the UK and the world is on course to reach Sustainable Development Goal Target 12.3.”

Tesco also recently launched the Tesco Community Cookery School with celebrity cook Jamie Oliver to help community groups who receive food waste donations make the best use of that food. The programme will offer training to over 1,000 community volunteers through the year.